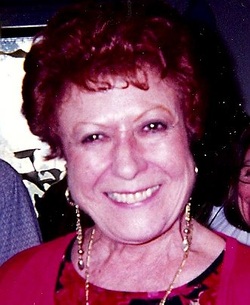 Eliane LeBeck passed away peacefully at her home in Santa Cruz, Saturday August 10, 2013 surrounded by family.  She was born in Talence, France on October 25, 1932.  She graduated from College Technique de Bordeaux with a Business Diploma in 1951 before working for the French government from 1951-1955.   She married an American GI, Sgt. Ernest H. Lewis in 1955. Eliane proudly became a US citizen while stationed in El Paso TX in 1959.  While stationed in Vicenza, Italy, she gave birth to her daughter Antoinette in 1962. Following the death of her husband Ernie, she married Michael D. LeBeck in Portland, Oregon 1969.  Eliane served as the supervisor of the foreign language book acquisition department for Richard Abel and Co. in Portland, Oregon (1969-1975). She was fluent in French, English, Italian, and proficient in Spanish languages.

Eliane was adventurous.  She spent a vacation in the 1950s riding all over France on a moped. 1n 1976 Eliane, her husband, and daughter sailed from Portland down the coast and around Baja California for a year, before moving to Ventura, CA in 1977.  In Ventura, she worked as a bookkeeper, a French tutor, and as a court interpreter.  Following her divorce in 1987, Eliane returned to school earning an Associate’s Degree from Ventura College and then transferring to UC Santa Barbara to earn her BA with highest honors in 1992.  She was a member of Phi Delta Phi French Honor Society and Golden Key National Honor Society. Following her graduation, she worked as lecturer in French language and literature at Cal Lutheran University. She later worked as an academic program assistant, first in the French and Italian Department, then in the East Asian language department at UC Santa Barbara.  She had also been an active member of the Ventura County Assistance League and the Alliance Française.

Eliane came to Santa Cruz to live with her daughter and son–in-law in 2002.  She continued tutoring French, became skilled at needlepoint, and discovered that she liked dogs.  She helped design and decorate the most elegant backyard cottage in the city. She employed her sharp language skills to correct Spanish papers for Tonie.  During this time she was proud to become an Ogimachi.

Eliane was loved by many. She was a sparkling gem of a woman who was the life of every party, and had a wonderful sense of style. She was an amazing French chef, terrific hostess, expert seamstress, lover of good books and great classical music.

Per her request, no services are planned. With a glass of your favorite Sauternes, Montbazillac, or other good wine, please celebrate her life, her vitality, and the courage and sense of fun she showed throughout her life.  We toast her with “Paix de l’esprit!” Her vast collections of photo albums will be kept for visitors to her cottage in Santa Cruz. Memorial donations in her memory can be made to Hospice of Santa Cruz County.